“Democrats believe immigration is not just a problem to be solved, it is a defining aspect of the American character and our shared history.”  Amen! But we have often been divided about immigration. We have barred and banned nations and regions, often on racial prejudices.

Two reasons explain why many migrate into the US unofficially: poverty and danger. When our laws prevent people because they are brown or poor or speak another language, they still find a way because Walls do not work.  No dam can stop a swollen river and no wall can prevent people from fleeing danger and poverty. Part of our immigration policy includes improving the health of our neighbor nations.  Here’s how we can do all of that:

2. End our ‘War on Drugs’ Policy: which paradoxically has created a more violent illegal drug industry and with it greater corruption and violence in Mexico and Central America.  Focus on reducing demand in the USA and treating the issue as a health problem will in turn diminish the market and the drug trade.

3. Create a bold Customs and Border Agreement between Mexico, the USA and Canada:  This would not be a European Union agreement that allows anyone to live anywhere at will. It would exchange greater liberty to work and do business in the three nations for more accountable migration and a stronger border between Mexico and Central America.

4. A clear path to legal residence or citizenship for those already in the US: Mass deportation is impossible. We must deal with the people here. Three things seem clear:

Dreamers (DACA) should be able to remain. Whether as citizens or as Permanent Legal Residents, they should not be held responsible for their parents’ actions nor punished for them.

Document everyone. Not an amnesty but an accounting, with a legal guarantee that all who are documented will be treated fairly, and that deportations will focus on the most criminal and most risky, and only those people will be held in custody.

Create clear criteria for unauthorized immigrants in the future – from relocation, to temporary residents with possibility to renew, to permanent residents. Those relocated because of poverty or danger should be assisted by the USA to insure they have a solid chance to prosper in their home countries and remain there.

FWIW, There is much more to be done that this, but we must do this. Why?  Well, years ago I lived in Brooklyn with a view of the Statue of Liberty and memorized the great poem that ends,

“… Give me your tired, your poor,
your huddled masses yearning to breathe free,
The wretched refuse of your teeming shore,
Send these, the homeless tempest tost to me…”

This is the American ideal at its best – to lift the lamp of hope. 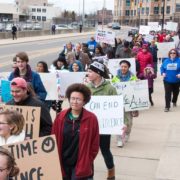 As a Democrat I share the party’s statement: “We can respect the rights of responsible gun owners while keeping our communities safe.” I also believe that we need universal background checks without exceptions for gun shows and private sales. We, and even the nonpartisan League of Women Voters support banning military grade weapons, like AR-15s and equivalents. We all say we need to study gun violence as a public health issue, which is not possible now.

Some gun rights advocates see these as a slippery slope but I disagree. No right in the Constitution is absolute and all of them come with responsibilities, including the right to keep and bear arms. Other reasonable ideas I support that would reduce gun violence are: