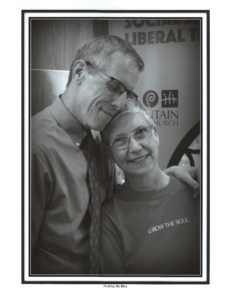 “I converted my parents,” he tells people, because when he was a young child they wanted a church and Sunday School that matched their liberal values.  They found Cedar Lane Unitarian Universalist Church in Bethesda, MD.  A few years later, after moving to Baltimore, they attended First Unitarian Church, where the famed William Ellery Channing delivered his definitive sermon, Unitarian Christianity, in 1819.  Fred, being one of the few children of that church to become a Minister, was honored to deliver the Bicentennial Lecture marking that occasion on the same day, May 5, 2019.

After taking a degree in Music Composition and Conducting, (and discovering how talented everyone else was), Fred entered Meadville Theological School in Chicago where he received a Master of Arts from the University of Chicago Divinity School, (1977), and a Doctor of Ministry degree from Meadville, (1979), and the Christie Prize in Preaching that year.

While preparing, he married Wendy Ricker, whom he met in the 4th grade.  They have two grown sons, Aaron and Stephen, and one daughter-in-law, Adelyn.

Fred was called to, and ordained by, the First Congregational Parish Unitarian in Petersham, MA, a tiny rural town with a great history.  The esteemed Leon Hopper and Waitstill Sharp were both predecessors and present at his ordination in October 1980.  During his five years serving there, Fred served on the Board of Rowe Camp and Conference Center and the Clara Barton District.  Wendy and Fred also had two children, Enoch, who was stillborn, and Aaron who today works in Chicago.  Because of that loss, they both became active in supporting other parents suffering infant death.

In 1985, Fred was called to Groton, MA, and served there until 1990. While there, he served as District Moderator and was appointed to the Hymnbook Commission in 1987.  He also remained a trombone player in the Petersham Town Band and joined the Groton Volunteer Band.  During that pastorate, they had their third son, Samuel, who was very premature and died at six months.

In 1990, Fred accepted a call in Austin, TX.  That church was growing and he helped them move to two services to accommodate their growth.  They also had their fourth son, Stephen, who is now married and lives in Grand Rapids.  During that time Fred, finished his work on the Hymnbook Commission, elected to the Commission on Appraisal of the UUA, (1991) and won the “Skinner Sermon Award” that same year, which was published in the UU World.

Fred accepted a call to Brooklyn NY in 1994 where he served for almost 11 years.  During that time he was asked by Moderator Denny Davidoff to help plan GA Plenary Presentations, which he did from 1997-2000.  He was instrumental in encouraging Anti-Racism work in his church and began celebrating same sex weddings.  Fred was active in the Local Clergy Association, organizing a massive observance after 9/11 on the Brooklyn Promenade.

Fred accepted a call to serve the non-UU Liberal Fountain Street Church in 2005, from which he retired as Senior Minister in April 2020.  During his service, they grew their Social Justice Ministries by over 400%, giving over $400,000 in grants to local, national, and international organizations.  He has served on the board of the West Michigan ACLU, the GR Interfaith Dialogue Association, Opera Grand Rapids, as a part of the Religion and Ethics Panel for our local paper.  he was host of “Faith & Reason” on a local radio station for seven years, and was a candidate for Congress in 2018. He is most proud of being a member of the Grand Rapids Urban League Board for over 10 years, serving as its Chair from 2009-2013.

“Having served a wide range of congregations, I see Unitarian Universalism as a both struggling and essential.  We are struggling to find our voice and place in a rapidly shifting world, a time of what I call ‘spiritual climate change’ that will oblige everyone to consider reforming everything other than our fundamental mission.  That mission, however variously expressed, comes down to three things: ‘to free the mind, grow the soul, and change the world.’ This fundamental mission is larger than UUism but often most visible in our communities.  Like the words once attributed to Hosea Ballou, We ‘may possess only a small light, but uncover it, let it shine.’  We are called to ‘use it in order to bring more light and understanding to the hearts and minds of men and women.’  Manifesting this liberating, animating, and agitating hope is what we are about.  Helping our communities come closer to that is my calling.”

Professional References are available upon request.
To contact Fred, write him at wfwbklyn@gmail.com.